Song: This Old Man
This old man,
He played one, (hold up one finger)
He played knick knack on my thumb.
With a knick knack (slap knees)
paddy wack (clap hands)
give a dog a bone, (hand jive)
This old man came rolling home. (roll hands)
Two … on my shoe // Three … on my knee // Four .. on the floor // Five … on the hive

Book: It’s Not Easy Being a Bunny by Marilyn Sadler; illustrated by Roger Bollen 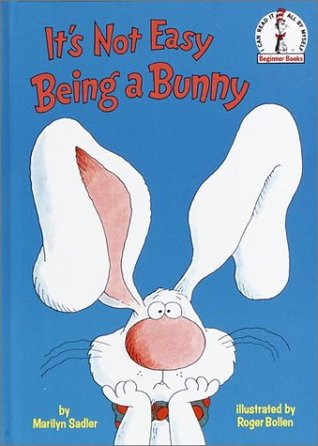 Little P. J. Funnybunny is tired of being a bunny so he tries out some other animal families to see if he likes them better. Of course, there’s no place like home.

I had the flannel pieces this time to point to and stare at. It didn’t make much of a difference. But the kids still loved to make silly faces at the end!

Song: Song cube (The Wheels on the Bus)

Flannel: Five Little Bunnies
One little bunny,
Wondering what to do,
Another bunny came along,
And then there were two.

Two little bunnies,
Hopping like me,
Another bunny came along,
And then there were three.

Three little bunnies,
Jumping around outdoors,
Another bunny joined them,
And then there were four.

Four little bunnies,
So fluffy and alive,
Another bunny joined them,
And then there were five.

Book: The Little Rabbit Who Liked to Say Moo by Jonathan Allen 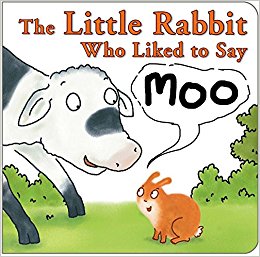 A little bunny adopts other animals’ sounds since rabbits don’t have a sound of their own to make. Then he decides on his favorite.

Then we count backwards to one and sang “shook his tail.”
Source: Librarian Lisa’s Storytimes

Book: Time for a Hug by Phillis Gershator and Mim Green; illustrated by David Walker 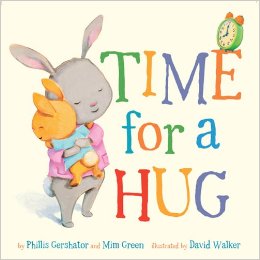 Sweet little book about a mama and baby rabbit who go about their day’s activities but always have time to stop for a hug. I read this to my baby boy and even though it doesn’t have anything to do with rabbits (aside from rabbits being the main characters), it was so sweet I wanted to read it for story time. The kids weren’t as moved as I was. 😀