My outreach kids visited the new library for the first time today and it was magical. I loved having them in our new space and they were so excited to pick out books to take back to school. I’m already looking forward to their May visit …

Frog is so excited to be back at his pond after the long, long winter but then he spots a terrible pond monster! Will Frog and his friends ever figure out how to get Frog safely to his pond?

My outreach kids are way too smart and knew right away that Frog and friends were seeing their shadows. But they still enjoyed the book and how silly the animals were.

Wiggle Rhyme: Watch Out for the Bugs (to the tune of Jingle Bells)
Clap your hands, stomp your feet
Wiggle all around
Throw your hands up in the air and now let’s touch the ground
Touch your head, touch your hips, give yourself a hug
Now sit down upon the floor
But watch out for the bugs!! (stamp out the bugs)

I did this again even though my pre-K kids weren’t super enthusiastic about it yesterday. My outreach kids really enjoyed it. Maybe having a test run reading helped me with the telling? Who knows. But all hope is not lost for Bear books at story time …

A little girl’s (school?) librarian loves books but she doesn’t. When Book Week comes, she doesn’t have a favorite book to share. Will she ever find one? This book went over well yesterday with my preschoolers and today with my outreach kids. Definitely a new addition to my books/reading story time!

Then BOOM went the thunder, (clap)
And ZAP went the lightning! (draw zigzag in the air)
That springtime storm was really frightening! (hide eyes behind hands)
But the flowers weren’t worried – no, no, no! (shake finger back and forth)
The rain helps them grow, grow, grow! (lift arms over head)
Adapted from Miss Meg’s Storytime 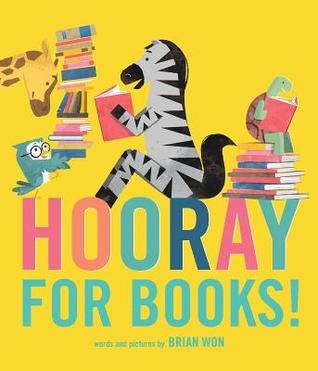 Turtle can’t find his favorite book. Maybe Zebra has it? Or Giraffe? Or Lion? Or Owl?

I gave them a choice between this and Lola Loves Stories by Anna McQuinn (my preference) and they chose this one. It’s a really cute book and the repetition is good for younger readers but I think they were a little too old for it …