Today was the first of six sessions of our brand new Dance, Rattle & Roll Story Time! I had 64 people. I ran out of rainbow ribbon bells (I was not expecting so many people!) but I think everyone still had a great time!

I got the idea for this program partly from Miss Katie and her Shake, Shimmy & Dance story time (I got a lot of song suggestions from her posts as well) and partly from a local gym I take my two-year-old son to. They use musical instruments and a parachute and he gets all of his wiggles out and we love it. So I started thinking about how we could do a similar program at the library.

I created a PowerPoint presentation to go over some rules for story time and to detail the book and songs we were going to use:

It really helped me too to have a visual as we were going through and I didn’t have to drag around a paper agenda with me. Everything we did is detailed in the PowerPoint but I’ll type it out as well. 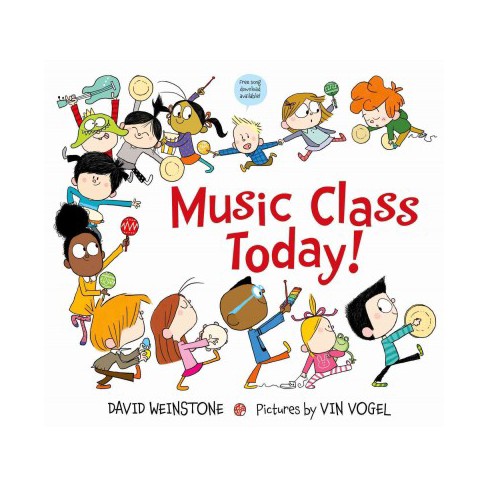 Rhyming book that’s actually song lyrics (you can look up the song online here). I liked how it showed some kids joining in and some observing and how both are all right.

Song: Shimmie Shake by The Wiggles

Then it was time for our rainbow ribbon bells. I should have realized a hot glue gun was no match for a toddler because several of our bells came off. I’ll have to find some crazy glue for the reattachments. I didn’t have enough ribbon bells for everyone but a lot of the kids took turns or handed them to someone else after the first song so everyone got a chance to use them. I found the first two songs went all right but by the time the third song came around, they were tired of just shaking bells. Next time we do ribbon bells two songs are probably sufficient.

Song: Roy G. Biv by They Might Be Giants

Gina is a local musician. She is on Spotify and I highly recommend her music. It’s lovely and all original!

I cut Green Frog a little short and had them return the ribbon bells.

Song: The Wheels on the Bus by Old Town School of Folk Music

This song went very well. I think the kids liked hearing something familiar after so many new selections. There were a few new instructions and a little more groove to the music but a classic song with a twist was a hit. Something to remember!

Song: Down on Grandpa’s Farm by Raffi

Didn’t go over as well. I thought the kids would like making the animal sounds. My Bluetooth speaker also wasn’t quite loud enough to cut through all the kid noise and I think they had a hard time hearing the song properly. I might look into playing Spotify over the computer and into the room speakers next time. That would be plenty loud enough.

Then we did The Grand Old Duke of York using the parachute which went over really well.

After that I had everyone stand up and I poured egg shakers onto the parachute to act as popcorn kernels for our next song:

Our particular parachute has a hole in the middle but the shakers stayed surprisingly well. Unfortunately the kids were so eager to make the shakers jump they didn’t start small, they went right to big. But who cares? They had fun with it and that’s all that matters.

I hadn’t planned on doing this next activity but the kids wanted to run under the parachute so much I improvised. I had the adults hold the edges and the kids stood underneath. We went up and down a couple times, we pointed out all the colors of the parachute, and we shook it on their heads. They loved it.

And last but not least, riding the parachute. I had so many kids we had to split them in to two groups. So half the kids sat on the parachute and the adults turned it around and shook it while they were inside. Then we had the second group go and did the same thing. I played our song twice:

Song: All Together Now by The Beatles

Finally we were done with our parachute time. I had everyone count one, two, three while we moved the parachute up and down as we counted and on three they were all supposed to let go at the same time and I would grab the parachute and wrap it up. But, of course, some of the kids didn’t let go so the effect wasn’t quite as fun. But maybe next time now that they know the game it’ll work a little better.

It was time for bubble lullaby time. I bought a cheap bubble machine at our local grocery store and planned to use it during our quiet song so the kids could lie down on the floor and watch the bubbles floating. But I didn’t test the machine until this morning. Lo and behold, it didn’t work properly. The fan worked fine but the circle of wands didn’t rotate. I’m going to take it to my dad who’s a mechanical genius to see if he can wiggle this and jiggle that and get it working. Hopefully for next time.

But we pressed on. I turned off the lights and the kids sat on laps and snuggled or sat or lay on the floor and we listened to the song (one of my favorites!) and caught our breath.

After that it was time to go. I turned the lights back on and we sang our goodbye song:

Phew! I was hot and sweaty and exhausted but it was totally worth it. I had a lot of families say they loved it and would be back. We’ll see!