After a long summer, I was ready to jump back in to our Ready, Set, Kindergarten! program again! I’ve really been looking forward to it. I had a great turnout and I was so happy to hear positive feedback after our long break.

To start, I went over our mobile classroom items of the week (Color: Red [like an apple]; Shape: Oval [like the shape of an apple leaf]; Letters: S & T; and Number: 9 [since September is the 9th month of the year]. Our concept of the week was rhyming words (which was a little beyond them).

Then we started circle time:

Then it was time for our theme discussion.

This was the perfect book for our purposes. It goes through the apple life cycle, how and where apples are grown, and some fall activities involving apples. It’s nice and big, the pictures are bright and colorful, and it’s not too long!

I chose this book for a couple of reasons. It’s always a hit whenever I read it and, of course, it involves apples. It also rhymes which was our concept of the week so I told the kids to listen for the words that sounded alike.

When we were done with our theme books we talked about our letters of the month. We discussed the letter S first. We talked about the sounds S makes and some words that start with S. Then we reviewed letter T.

A little boy adopts a pet snake who turns out to be a hero! This book has some great S words and was a great opportunity to listen for our S sounds. Then we did our letter S craft. This is the same one I created for our Annual ABC project two years ago. 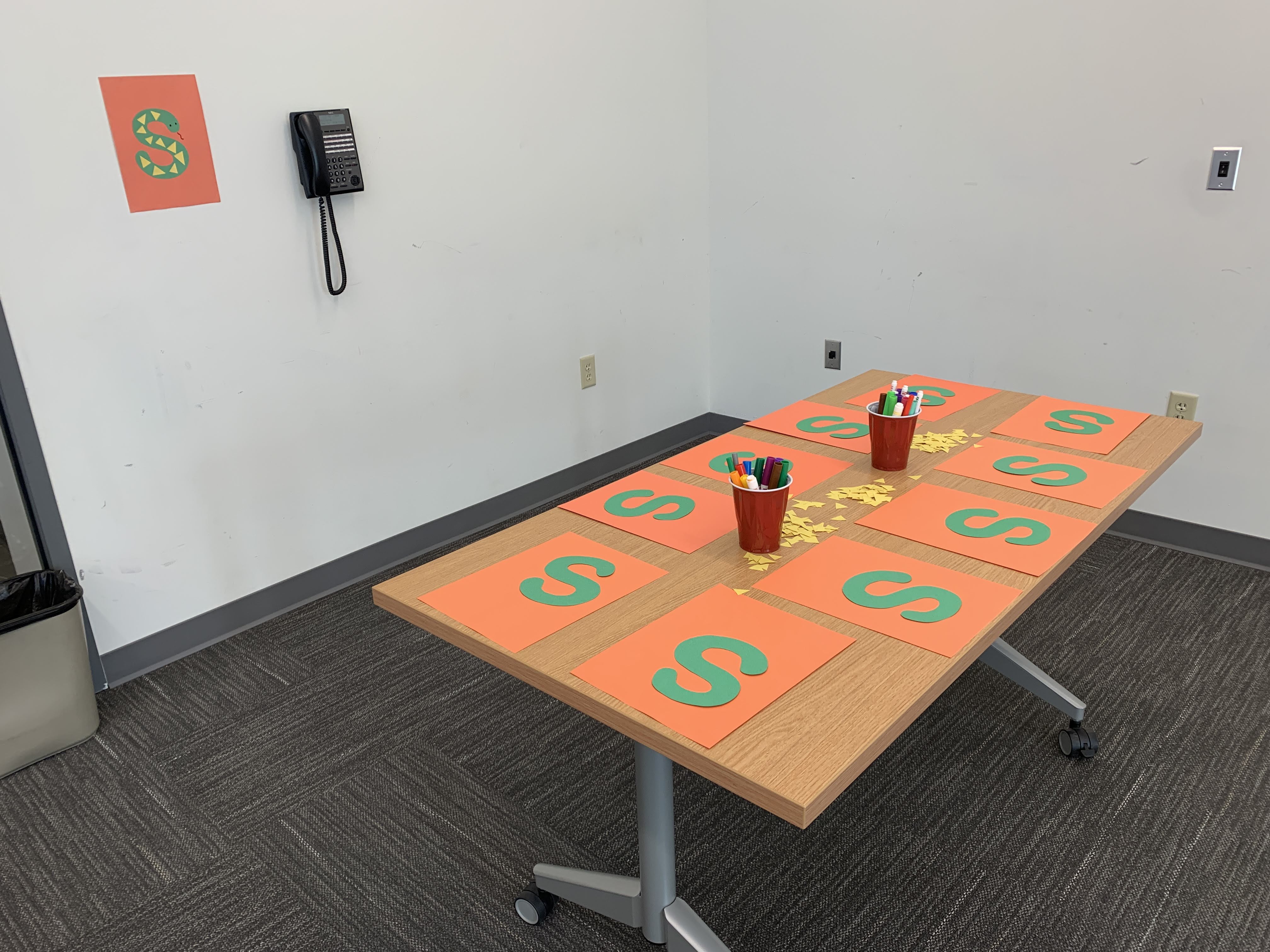 After our craft, we did a sink or float experiment using fall objects. I created a prediction worksheet so the kids could think about each object and write down what they thought would happen with each. 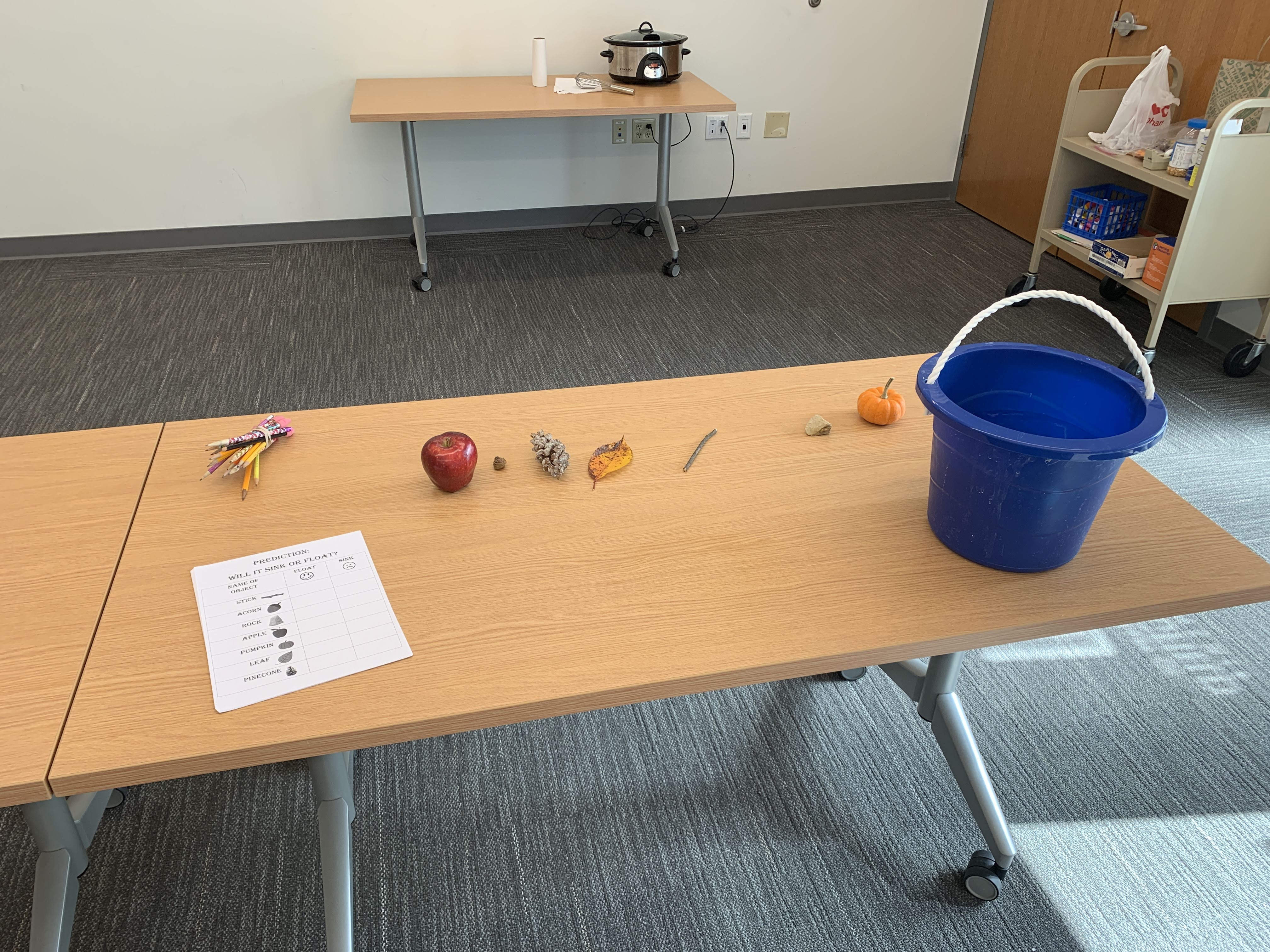 In hindsight, only one object sank! If I do this again in the future I’ll try and find another object that sinks. But the kids had a blast guessing and seeing if they were right. They were hesitant to guess at first, I don’t think they wanted to be wrong. But I told them scientists are wrong all the time and being wrong is part of science. I think that made them feel better. I also made sure to drop the objects from a good height so they splashed a bit which they got a big kick out of. 🙂

Then the kids were free to roam the centers. I made all of the signs in Canva.

I filled the tray with salt and lined it with an image from Canva. The number formation rhyme is from Teaching Mama. The letter instructions came from Worksheets to Print. 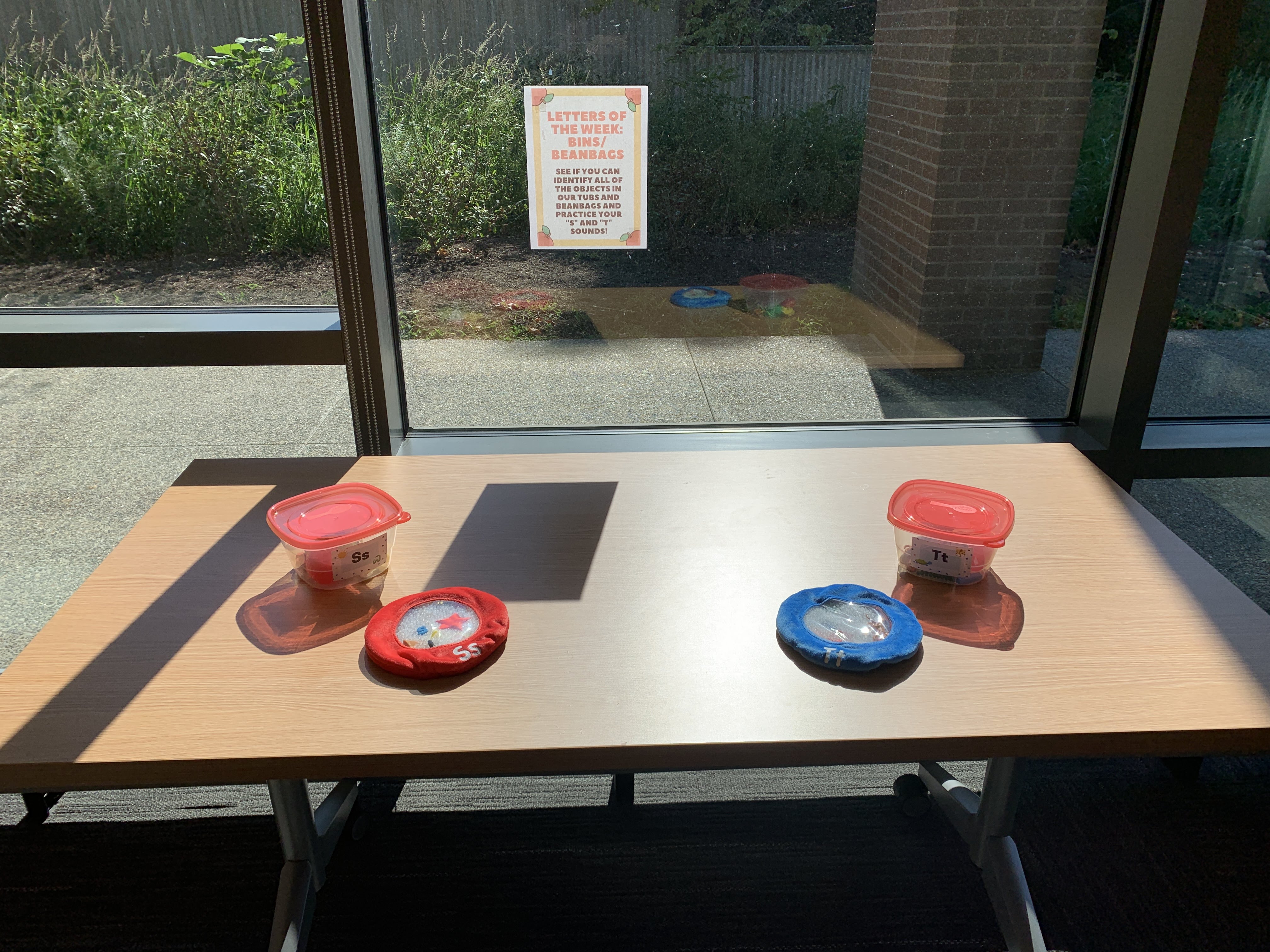 The seahorse bath toy was borrowed from my son. The submarine and sailboat came from the In the Water TOOB. The snake came from The Land Down Under TOOB. The starfish and strawberry came in different sets from Dollar Tree. 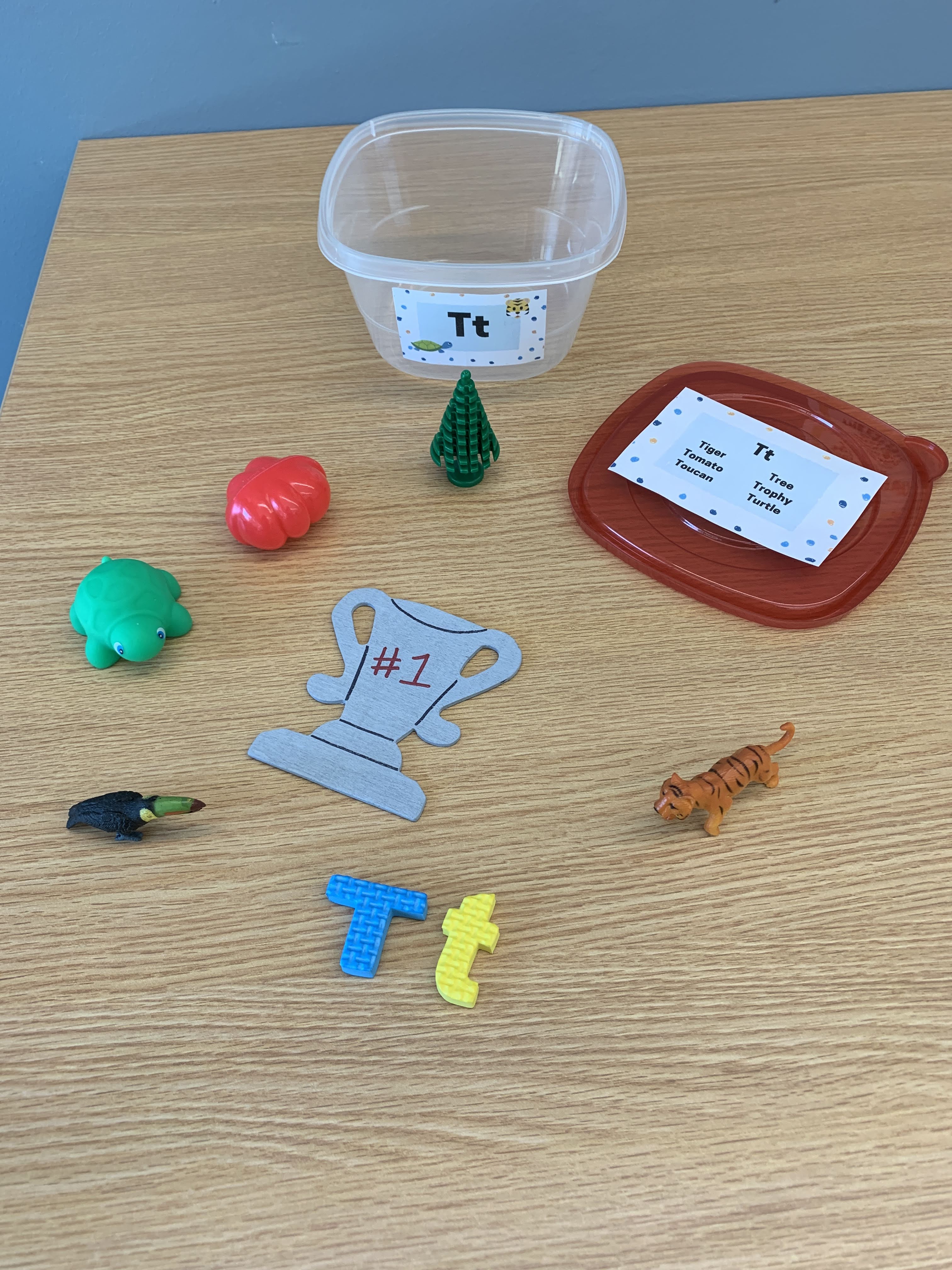 The trophy came from A.C. Moore. I painted it myself and used Sharpie for the accents. The tiger came from my Wild TOOB and the toucan came from the Exotic Birds TOOB. The turtle came in a set from Dollar Tree. The tomato was borrowed from my son’s play kitchen. The tree came from the library’s Lego collection.

The foam letters for both bins came from puzzles I found at Dollar Tree. I created the tub labels in Canva. 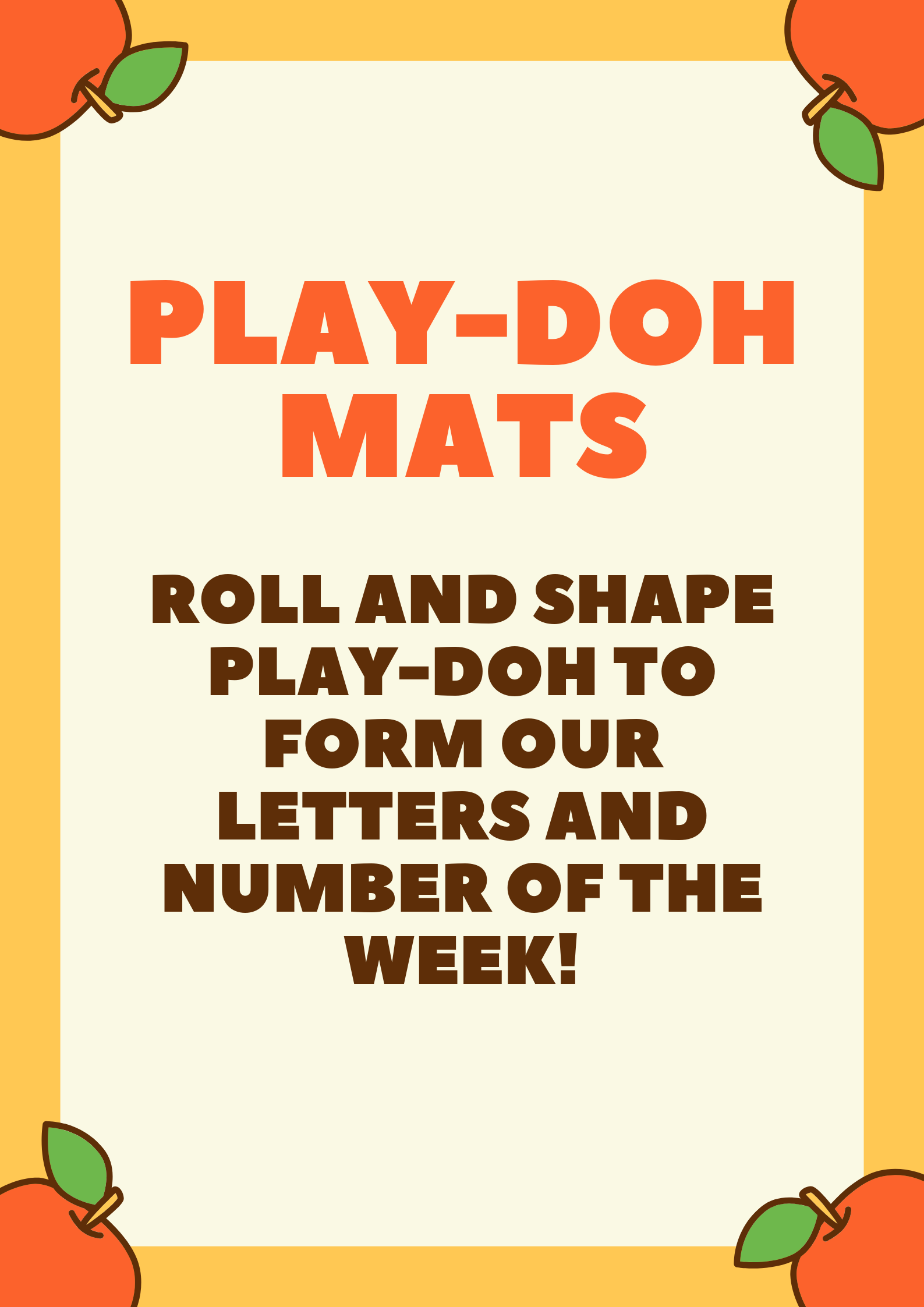 I know the color of the week was red but I had to get rid of our red play-doh because it dried out so I reused our green play-doh. I figured green was also the color of apples so that was good enough for me! I got the alphabet and counting mats from Oriental Trading.

This week’s sensory bin was filled with corn and green lentils. I added small flower pots bought at Dollar Tree and a little yellow shovel so kids could dig around. I also threw in a few fake leaves (also from Dollar Tree) to make it festive.

I also buried rhyming acorn halves. Each half had a picture that the kids had to match up (example: fox and blocks). I think this was was a bit of a challenge for them but they enjoyed digging and playing in the bin anyway!

I got the idea for the rhyming acorns from Mrs. Jones’ Creation Station. I created my own if you want to print them out and use them! I printed them out in color, laminated them, and cut them apart. 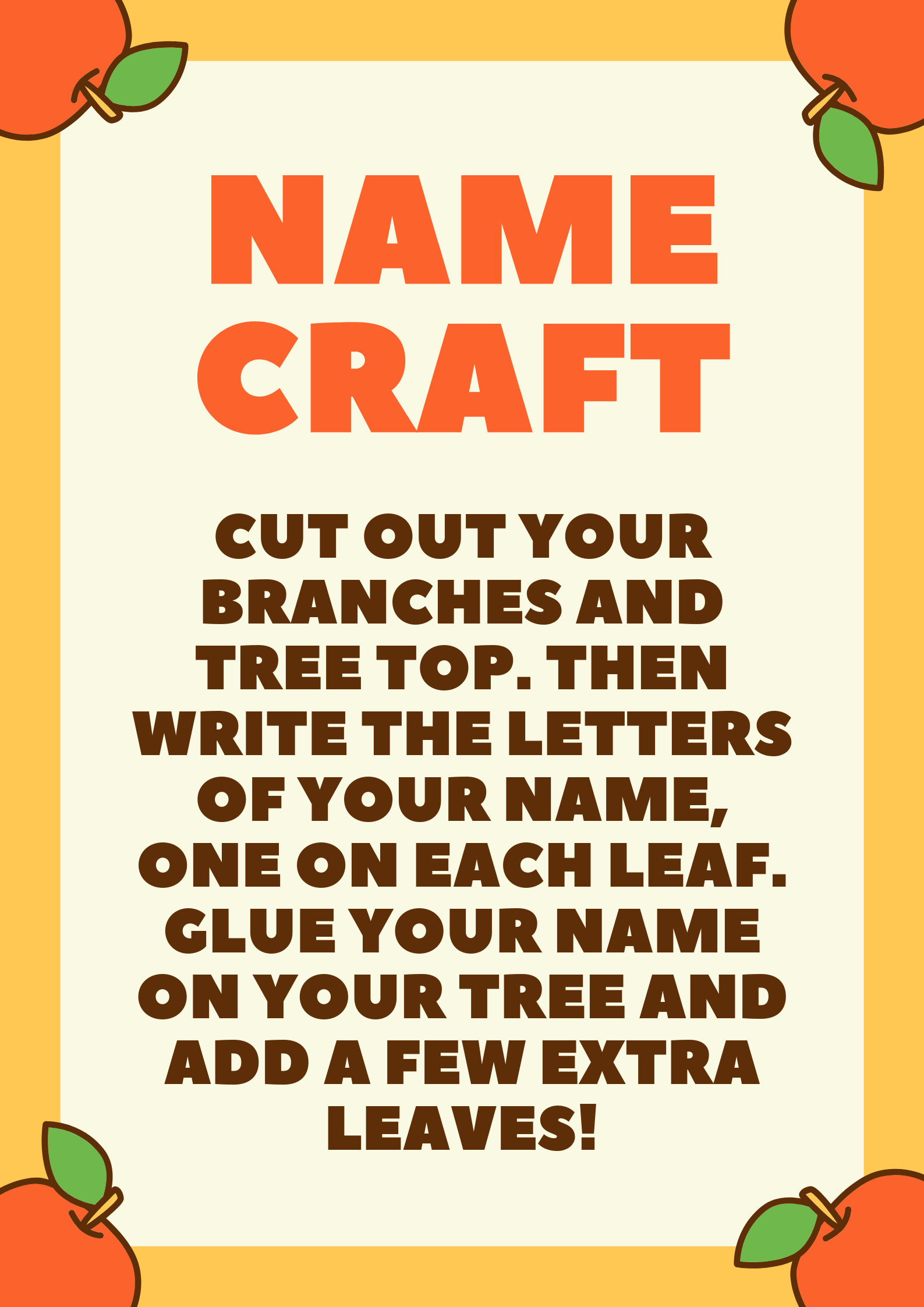 I got this idea from Mrs. Plemons’ Kindergarten. (She has the best ideas!) We have a wonderful volunteer who used our die cut machine to cut out all of the leaves for me.

As you can see, I only traced the leaves and trunks so the kids could cut them themselves. They had varying success with this but I did it on purpose. I know lack of scissor skills are a complaint our area kindergarten teachers have so I wanted to give the kids practice. I wanted them to practice writing their names as well but a lot of them just glued blank leaves down. *sigh*

I got the idea for pom pom sorting from Fairy Poppins. AND she offered these amazing mats for free! I really wanted the kids to use the tweezers to strengthen their hand muscles for writing but most of them ended up using their fingers. 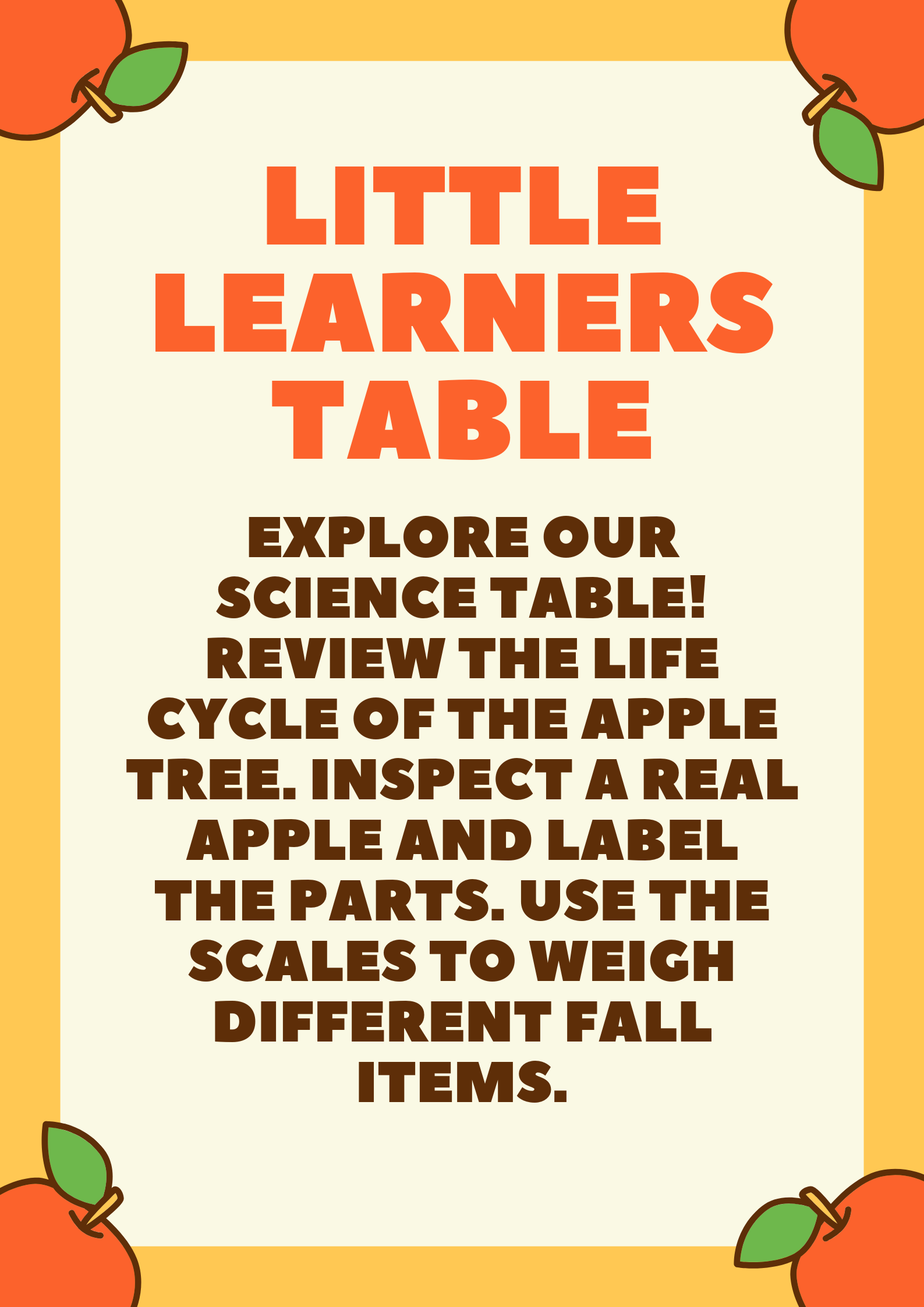 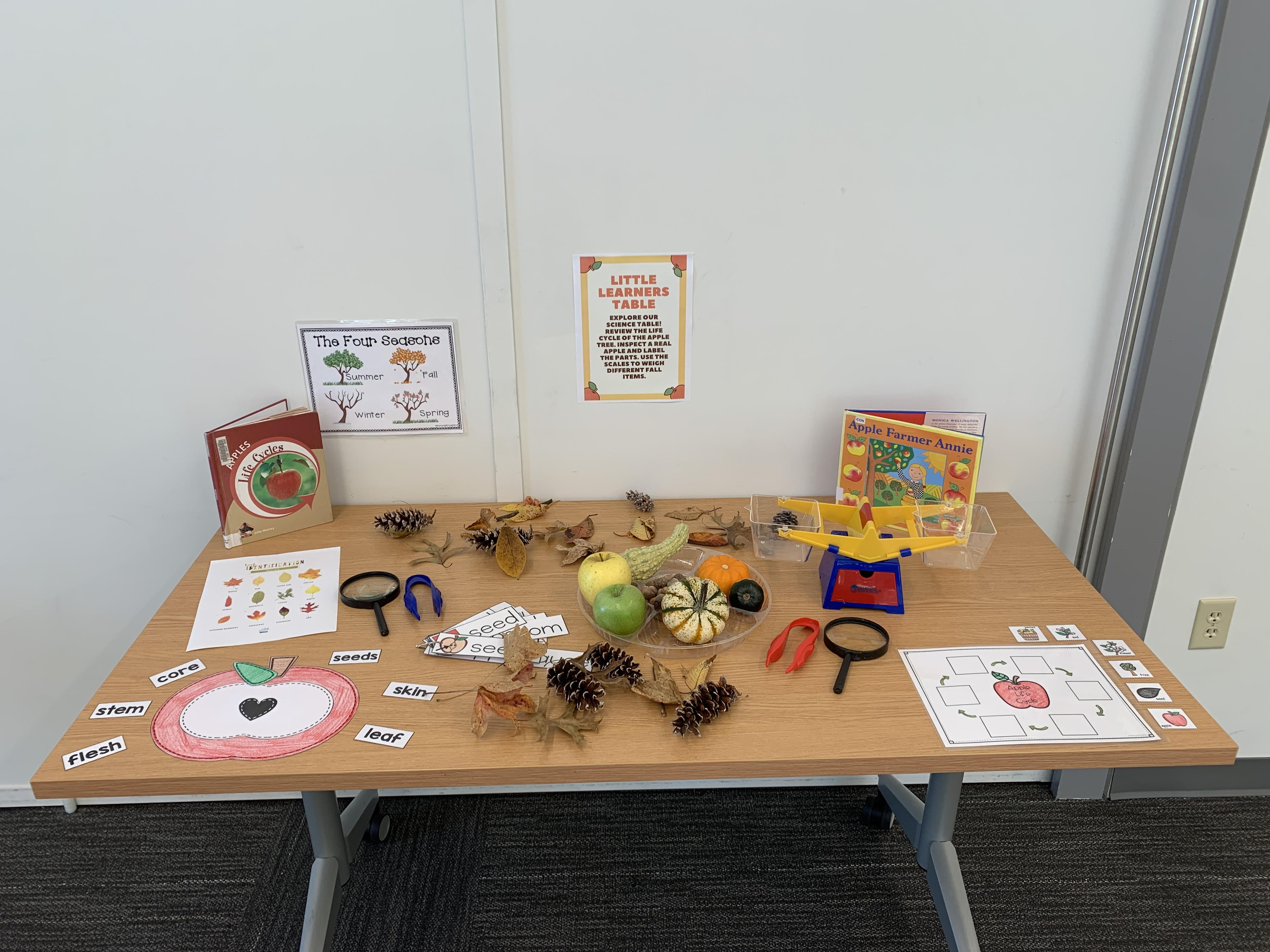 And finally, our Little Learners table!

The idea for a learning table along with some of the display ideas came from Pocket of Preschool (another brilliant site). I gathered leaves, pine cones, sticks, and acorns from the neighborhood by the library. I set out tweezers and magnifying glasses along with our scale. I put out a leaf identification guide I found on iMom. I got the apple life cycle mat from Adventures in Kinder and Beyond on Teachers Pay Teachers. I got the apple vocabulary words from A Dab of Glue Will Do. And I got the apple part labeling from Mister Kinder. The four seasons of trees poster came from Stomping Through First. Teachers are the BEST!

And, not shown because I did it at the last minute, I also cut up an apple so they could look at the inside and see the seeds and core and such.

Last, I made homemade apple sauce for the kids to try. I got the recipe from Belle of the Kitchen and it was DELICIOUS! (And super easy!)

I started it around 12:30 pm and it was perfect by the time we were done with circle time! The kids (and adults) went back for seconds and thirds. I made the whole recipe and we didn’t have any leftover! Plus the room smelled incredible.

I forgot how much I absolutely adore this program. I’m only doing it once a month now instead of every two weeks. It was too time consuming for me and I wasn’t available to do much else! I’m already looking forward to Halloween and pumpkins …